Editor’s note: When Facebook released its Paper app, it generated a lot of buzz in the app world. If you’ve used Paper before, the visual news feed reader, you should be amazed by its beautiful and fluid user interface. The design and attention to detail on the app is unmatched. The app refrains from using buttons and menus, but was built to be gesture-driven, to a degree that was uncommonly found in iOS apps at the time of its release. It went beyond Core Animation. The team has built its own animation engine to support all the smooth animations and coordinate animations with touch inputs. When I first tried out the app, I was wondering how some of the animations were implemented. Honestly I didn’t know how. A couple months later, the company open-sourced Pop, the animation engine behind its iOS Paper app. As a Facebook’s engineer described, Pop drives the scrolling, bouncing, and unfolding effects that bring Paper to life. Thanks to Facebook team. With the Pop framework, this means you can create similar animations that were found on Paper in your own apps.

The Pop framework was first released in late April, 2014. So far we haven’t written any tutorials about the framework. Thanks to Hossam who is kind enough to share with us an introduction of POP and show us how to create a few simple animations. In this tutorial, we will talk about Facebook POP framework to make great and easy animations in your own iOS apps. Like any other tutorials on AppCoda, I will help you understand and master Pop by examples. We will create four simple animations together to explore the framework.

Pop is an extensible animation engine for both iOS and OS X. In addition to basic animations including Linear, Ease-In, Ease-Out, Ease-In-Ease-Out animations, it supports spring (at the time of its release, spring animation was not supported in iOS), decay and custom animations:

The fundamental animation type of Pop is a POPAnimation. You can think of it as the abstract or base class of all POP animations. The Pop interface is implemented as an addition of category on NSObject. This allows any object to be animated. The Pop API is very developer friendly that lets you easily build some realistic, physics-based interactions. For instance, here is the code snippet for creating a spring animation on a text label:

Easy, right? Let’s get started and create the demo app. I’m sure you’ll have a better understanding of Pop after going through the project.

If you use CocoaPods, you can just add the following to your project Podfile:

For non-CocoaPods project, you can download the Pop framework here and add the “pop” folder to your workspace. Go to your project and ensure the “Other Linker Flags” option is added with -lc++ under Build Settings. If you don’t want to start from scratch, you can download the starter project here.

For the first example, we will create animations on the table view cells. We will add a basic scale up animation when a user highlights a cell. When releasing, we will scale it back using spring animation.

Go to ExampleCell.m and override the setHighlighted: method using the code snippet below:

It is pretty straightforward to use Pop. You first choose a particular type of animation. Like the above example, we pick the POPBasicAnimation when the cell is highlighted and POPSpringAnimation when the user lifts up his/her finger. Once you select the type of animation, the second thing is to provide the animation properties. For both animations, we specify the kPOPViewScaleXY property for scaling the label. Next, we specify toValue which describes your desired end state of the animation. In the above, we set to CGPointMake(1, 1) that scales the object with a value of one. Depending on the type of animation you’re creating, you’ll have to configure addition settings like springBounciness in spring animations that controls the bouncing effect. Lastly, we add the animation to the text label and give it a name (e.g. springAnimation).

Note: Pop provides a number of predefined properties for creating animations. You can find out the properties by referring to the POPAnimatableProperty.h.

Now build and run the app. Highlight any cell and release it to test the animation.

Have you used the Facebook Messenger app? I really like the animation of the Send/Like button when you start to type message to a friend. I decided to use Pop to create a similar animation. Lastly, connect the example list view controller with Facebook Like view controller by using a manual segue. Set the identifier of the segue as “openFB”. Later we’ll use code to trigger the segue.

Once you designed the user interface, create a new class called FacebookButtonAnimationViewController and set it as the custom class of the view controller.

In the viewDidLoad method of FacebookButtonAnimationViewController.m, insert the following line of code to set the delegate of text field and hide the Send button:

Now we will implement the methods for handling the text field. Insert these methods in the same file:

In the showSendButton method, we hide the Like button and show the Send button, and then apply a spring animation with the kPOPViewScaleXY property on the Send button.

The same technique is used for the Like button but we apply a rotation animation instead. We first create an instance of POPSpringAnimation and then set the “from” and “to” values. The Like button is rotated from 45 degrees (i.e. M_PI/4) to 0 degree with bounciness set to 20.

Lastly, insert the following method in ExamplesListViewController.m to trigger the segue:

Now it is ready to test the app. Hit the Run button and key in a character in the text field to test the animation.

As a Mac user, you should be very familiar with the password field in Mac OS X. When you type a wrong password during login, the text field shakes. In this example, we’ll use Pop to replicate the animation.

First, go to Interface Builder and add a new view controller. Then add a text field and a Login button. Again, create a manual segue between the Example List View Controller and the new view controller. Set the segue’s identifier to “openWrongPass”. Your user interface should be similar to this: Next, create a new class called WrongPasswordViewController and set it as the custom class of the new view controller. Create an outlet variable for the text field and name it passwordTextField.

Then we create an action method named “login” for the Login button.

As said before, we will apply a “shake” animation on the text field to indicate a wrong password. For demo purpose, we will not verify the password. We will just show the animation whenever the user clicks the Login button.

The above code is pretty straightforward. We create the POPSpringAnimation with the kPOPLayerPositionX property. This property simply moves the text field along the X axis.

Lastly, remember to import the POP.h at the beginning of the WrongPasswordViewController.m:

Cool! Compile and run the app to test the animation. You can have a quick test of the app. When you select Custom VC Transition, the CustomVCTransitionController should appear.

In CustomVCTransitionViewController.m, add the following lines of code to import the header files:

Then insert the following methods to implement the action method of the Present button and the required methods of the protocol:

When the button is tapped, the didClickOnPresent method will be invoked. Here we instantiate the modal view controller and set the transitioning delegate to the current view controller. We also set the modal presentation style to custom. (With the action method, remember to establish a connection between the Present button and the method in storyboard.)

We haven’t created both animator classes yet. Now create a new class called PresentingAnimationController, set it as a subclass of NSObject and adopt the UIViewControllerAnimatedTransitioning protocol:

In PresentingAnimationController.m, add the following methods:

Next, create a new class named DismissingAnimationController and adopt the UIViewControllerAnimatedTransitioning protocol:

Similarly, we create the dismissing animation by implementing the required method of the UIViewControllerAnimatedTransitioning protocol:

Go back to the CustomModalViewController.m, update the viewDidLoad method and implement the didClickOnClose method:

Finally, establish a connection between the Close button with the didClickOnClose method in InterfaceBuilder.

Cool! It’s ready to test the app. Run it and test the view transition.

In this tutorial, I gave you an introduction of Facebook’s Pop framework. As you can see, the animation engine is pretty easy to use. If you understand the animation techniques covered in the tutorial, you should be able to create your own animation in your apps.

For your reference, you can download the complete Xcode project here. Or you can check out the project on Github.

Hossam Ghareeb is a software engineer with years of experience in iOS development. He is very interested in writing tutorials and sharing his knowledge with others. He is the author of Application Development With Swift book. You can find him on Twitter. 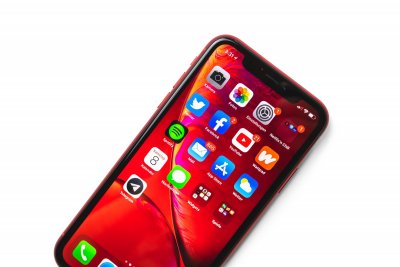 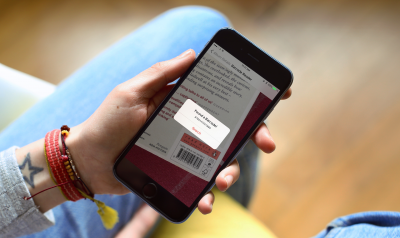 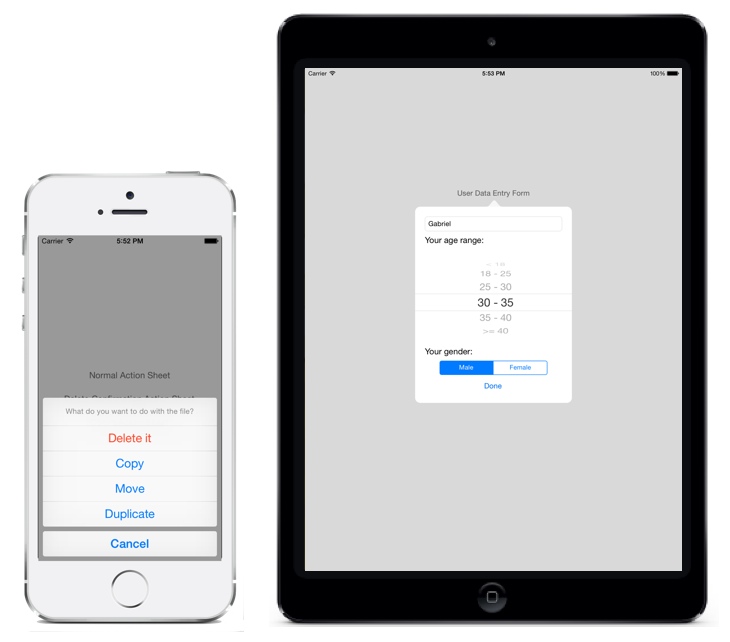